Find articles by Misharin, A. in: JCI | PubMed | Google Scholar |

Influenza A virus (IAV) is among the most common causes of pneumonia related death worldwide. Pulmonary epithelial cells are the primary target for viral infection and replication and respond by releasing inflammatory mediators that recruit immune cells to mount the host response. Severe lung injury and death during IAV infection results from an exuberant host inflammatory response. The linear ubiquitin assembly complex (LUBAC), composed of SHARPIN, HOIL-1L and HOIP, is a critical regulator of NF-κB-dependent inflammation. Using mice with lung epithelial specific deletions of HOIL-1L or HOIP in a model of IAV infection, we provided evidence that, while a reduction in the inflammatory response was beneficial, ablation of the LUBAC-dependent lung epithelial-driven response worsened lung injury and increased mortality. Moreover, we described a mechanism for the upregulation of HOIL-1L in infected and non-infected cells triggered by the activation of type I interferon receptor and mediated by IRF1, which was maladaptive and contributed to hyper-inflammation. Thus, we propose that lung epithelial LUBAC acts as a molecular rheostat that could be selectively targeted to modulate the immune response in patients with severe IAV-induced pneumonia. 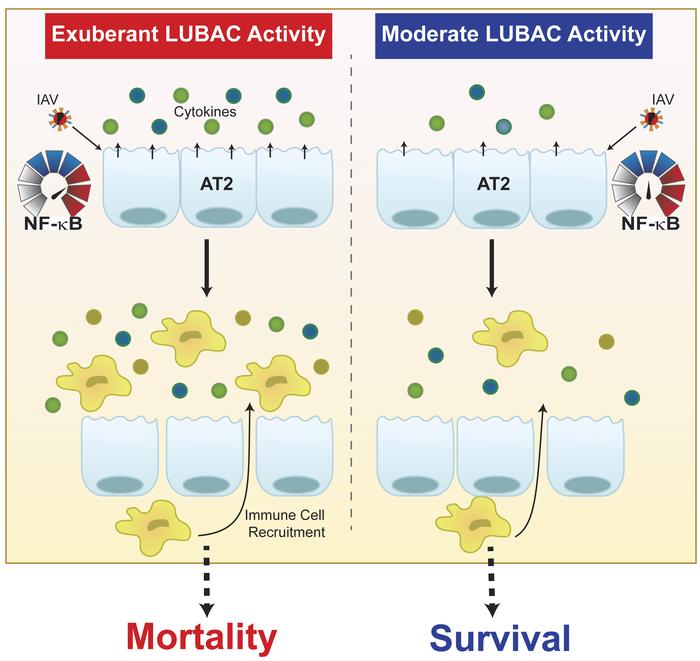